You would agree that today a business blog site is a vital component of your marketing strategy. The benefits of maintaining such a site are manifold, ranging from helping the business to project itself as an industry leader, starting a conversation with target audiences, garner leads, and much more. However, to reap such benefits, one needs to undertake considerable efforts to continuously optimize the site, so that it can attract visitors and convert them into customers. By taking the advice of website development company in Phoenix Arizona AZ, one may focus on enhancing the user experience and content of the site, so that it can spur traffic and subsequent sales.

There are primarily three parameters which determine the readability of a blog – a clear visual design, sentence structure, and ease of understanding the text for arriving at a conclusion. Making use of white space is a great way to improve readability. One also needs to get rid of distractions, such as widgets or banners, if one wants the audience to fully concentrate on the main content. In the typography aspect, one needs to ensure that the font is not too small, or the paragraphs aren’t cluttered.

The prime motive of having a blog in the first place is to get subscriptions. Hence, one must ensure that the procedure of subscribing to the site is easy and seamless for the visitor.  The subscription box should be clearly visible on all the pages. For more tips on this aspect, one may get in touch with Etoile Info Solutions, a premier website development company in Phoenix.

At times, visitors are on the lookout for a particular topic on the blog. To cater to such requirements, it is better to have a prominent search box. It should be large enough so that it can be easily noticed by the visitor. A renowned website development company in Arizona AZ suggests placing the search box above the fold.

Of course, there are several other pointers, which help in attracting traffic, such as seamless navigation, reduced loading time of pages, social sharing options, and many more. The key lies in offering a great user experience and meaningful information to the visitors.

A few essential hacks coupled with technical help from e-commerce website designers can enhance the number of conversions on an e-commerce portal.

E-commerce website is the new shopping destination for everyone. While getting customers to the portal is just half the job, it essentially takes more effort to actually close the sale. Listed below are 4 basic tips to increase the number of conversions on an ecommerce portal.

After publishing the advertisements online, it is important that the customer lands on the product page instead of the homepage, when he/she clicks on the advert. This saves time and helps the customer to locate the exact product he is looking for. It also holds his/her attention intact.

Giving a genuine and engaging product description is very important. One may incorporate a well-chosen set of keywords in the product descriptions, as this would help in locating the website, whenever someone looks for that particular item on the internet. One must also ensure to provide the shipping details along with the product description, as customers tend to abandon the sale if they found out new details while checking-out.

Since an e-commerce portal has a vast range of products to explore, it is important that the design is user-friendly. One may take help from a reputed e-commerce website design company in order to build an effective online shopping site. A slow website is always annoying, and if it is an e-commerce portal, the consequences may be disastrous. Therefore, one should ensure that the portal is not only fast, but faster than its competitors.

Online shopping is the most convenient form of shopping primarily because it can be carried out on any device, be it mobile, laptops, or tablet. This is a major factor to ponder upon, as the portal needs to be user-friendly across all formats. The customer might search for a product from a laptop, but may order it later from mobile. Therefore, it is essential to focus on creating a responsive site, by taking the help of expert e-commerce website designers.

It is seen that the e-commerce website design itself plays a key role in closing a sale. One may rely on professionals such as Etoile Info Solutions for deriving instant success in this aspect.

Mobile apps are becoming exceedingly popular with the increase in the number of smart phone users. However, not all apps appeal to users, and sooner or later they uninstall the same, due to various reasons. Therefore, one needs to be very cautious about a few things Best mobile application development company. 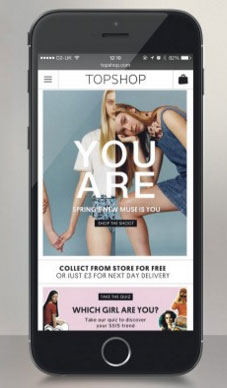 Some of the common mistakes committed in this aspect are:

1. Having too many features

The whole idea of having a mobile app with a simple interface would be defeated if one puts too many features or options on the screen. The presence of too many features comes in the way of seamless navigation, and in turn, also impacts user experience. While some companies insist on including numerous features and functionalities for a high PPI, however, in reality, it does not make interaction any easier.

2. Having the same style for all Operating Systems

The same mobile app design for all operating systems is a big NO! It annoys the users who are familiarized with the features and style of a particular OS. Therefore, one must be very careful in observing the navigation style and the layout of a particular OS while creating an app.

3. Not considering the needs of the end user

What most businesses miss out on, is taking into consideration the width of the finger of any average user. Index fingers are around 1.6 cm to 2 cm wide, and hence, the buttons must be large enough for the users to access with ease. Smaller buttons might create problems like selecting unwanted features or pressing several buttons at one go, thereby causing the user to feel irritated and frustrated. For more tips in this domain, one may get in touch with a reputed app designing company.

With more than 1 million apps on the major platforms, one is always under constant competition. Nevertheless, it is prudent to avoid multiplying designing expenses, by concentrating on only one platform first.

A good developer would always run tests on the app before actually releasing it officially. This wipes out the problems of freezing and detection of bugs. Moreover, people spend more time using mobile apps than browsing on a desktop, so it is very important that no such inaccuracy pops up. One may contact Etoile Info Solutions, one of the best mobile app development company for valuable insights & assistance on this subject.